Room P - Star Unlocks
Addie is a character who makes his first appearance in Slider Scouts.

Addie is a friendly traveling television. He makes a living as a door-to-door salesman in search of an audience to view his commercials. Addie gets a tiny commission every time someone views his advertisements, and in exchange, he graciously shares the money with his viewers. Addie loves his job, but understands not everyone has time to watch his commercials. For that reason, he never takes it personally when someone says “no thanks” to his simple sales pitch.

He is an anthropomorphic television that will appear frequently, offering 10 coins to players in exchange for watching a short (usually no more than 30 seconds long) advertisement. When the player gets 100 stars, he will be available for the player to use him as a scout. 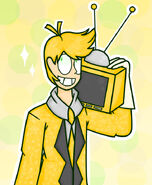 By 763Lilypadpandaowl
Add a photo to this gallery

Retrieved from "https://fliplinestudios.fandom.com/wiki/Addie?oldid=470915"
Community content is available under CC-BY-SA unless otherwise noted.