Room H - BLT
Bacoburn are enemies and a variant of the Bacobar featured in Papa Louie 2: When Burgers Attack!. Unlike Bacobars, instead of being stomped on and squashed, they morph into three hopping baddies.


Bacoburns are tall crispy strips of grumpy bacon from the BBQ Bog. As they march, they can deflect most side attacks which can prove quite difficult in narrow passageways. Bacoburns only weakness is a quick stomp on their head. This aerial attack will shatter a Bacoburn into tiny Bacobites. Once the Bacobites are unleashed, they will jump around frantically making for an even more hazardous path to cross.

This scout feels more at home in camp than with his taller brethren from BBQ Bog. Although Bacoburn can be somewhat of a grump, he’s tidy and keeps to himself which makes for a decent bunkmate. [1] 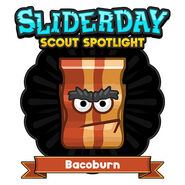 Baco Bites in PL2
Add a photo to this gallery

Retrieved from "https://fliplinestudios.fandom.com/wiki/Bacoburn?oldid=456747"
Community content is available under CC-BY-SA unless otherwise noted.