N/A
Boopsy & Bill are male characters who made their first appearance in Papa's Donuteria To Go!. Boopsy is the human and Bill is his puppet.

Boopsy has gray hair and sideburns. He wears a black and gray long-sleeved shirt with black lines, black pants, and gray moccasins with black soles and orange laces. He also wears an orange neckerchief.

Bill has blond hair and freckles. He wears a cyan cowboy hat with an orange rim, a cyan shirt with white stars, yellow pants, orange shoes with cyan laces and brown soles, white gloves, and the same neckerchief as Boopsy.

Boopsy and Bill swap outfits with each other, except Boopsy does not wear the gloves and has pockets on his pants. Boopsy also has freckles just like Bill.

In games where they dress up for Halloween, Boopsy wears a mime costume while Bill wears a costume of a possessed doll. Boopsy has black hair, a red hat, black eye shadow, brown freckles, and white face paint. He wears a red neckerchief, a horizontally striped white and gray shirt, white gloves, and red shoelaces. Bill has orange hair and wears a light blue and light green shirt with red sleeve ends under dark blue overalls with red buttons, and red shoes with brown soles and white laces.

Ranks required to unlock them

Earn all three stickers in this game to earn this outfit:

Boopsy & Bill's Pastaria To Go! regular order
Add a photo to this gallery

New Year 2020
Add a photo to this gallery 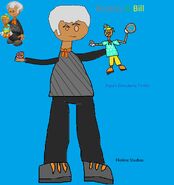 Retrieved from "https://fliplinestudios.fandom.com/wiki/Boopsy_%26_Bill?oldid=503390"
Community content is available under CC-BY-SA unless otherwise noted.