Note: This article is about the enemy character Burgerzilla from Papa Louie 2. For the minigame, see Burgerzilla.

Burgerzillas are one of the many enemies of Papa Louie 2: When Burgers Attack!. They are anthropomorphic burgers who hop around in their territory.

Burgerzillas are towering watchdogs designed to keep out any would-be intruders with a hero complex. These mega monsters were concocted by Radley Madish to aid in his quest for world domination. Burgerzillas are loaded to the brim with toppings, so you’ll need to hit them many times to bring these behemoths toppling down.

Burgerzillas are large monstrous looking burgers which have olives for eyes, a pickle for a tongue (usually is seen sticking out its mouth), melted cheese for teeth, and has a tomato, hamburger patty, onions, and lettuce making up the rest of the body. They have visible nostrils sticking out, making them resemble a T-Rex.

Burgerzillas attack by occasionally making huge jumps across the ground. They are not aggressive, but in the later levels some Burgerzillas will try to hop towards the player's general direction rather than jump around randomly.

In order to defeat a Burgerzilla, you have to hit it 4 times with your weapon, with each hit knocking out some of its toppings. When you hit it once, the onion falls out. When you hit it second time, the patty falls out. Hitting it a third time knocks out the tomato, and the fourth hit knocks off the lettuce and kills it.

A Burgerzilla without its toppings 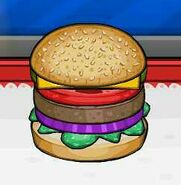 Burgerzilla in PL2
Add a photo to this gallery

Retrieved from "https://fliplinestudios.fandom.com/wiki/Burgerzilla_(Character)?oldid=456768"
Community content is available under CC-BY-SA unless otherwise noted.