Papa's Freezeria(cameo on the Freezeria intro only)

His roles in the games

He first appeared in the original Papa Louie game as a trapped customer. In all games so far (except for Papa's Freezeria), he appeared as a customer and in Papa's Pancakeria, he is the male playable chef. He won the first ever Next Chefs tournament and won to be the chef in that game.

While Cooper wore a red and white shirt with only "Papa Louie" on it, starting from Papa's Taco Mia!, he wore a "Papa Louie" shirt with a new style until Wingeria, where he wears his Pancakeria uniform with Cookie on his back. Therefore, he is the first male customer to change his customer appearance with a worker uniform. He is the second male customer to walk around in his chef uniform, 1st was Roy (although Roy always walks around in his uniform)

His orders are usually small. His order ticket only has just one blank space in Taco Mia! and Wingeria. 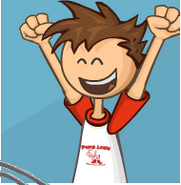 Cooper's appearance in Pizzeria and Burgeria 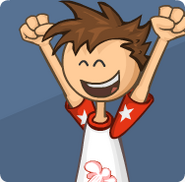 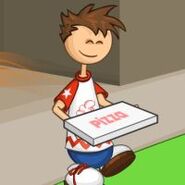 Cooper's full appearance in the Papa's Next Chefs 2011 Tournament.

Cooper and Prudence with their pets 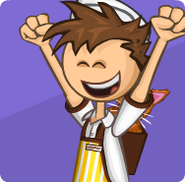 Cooper's cameo in the Freezeria opening.

Cooper is happy about his pizza.

Cooper is happy about his burger.

Prudence is ordering a blueberry syrup and maple syrup plate to the coworker.
Trolo.png

Community content is available under CC-BY-SA unless otherwise noted.