Dudley is the main antagonist in the game Jacksmith who captured King Plumpfeather's daughter, Liliana.

Dudley is a wizard who lives alone in the ruins of a once great kingdom. His ancestors escaped to the ruins during the Great Rat Eviction. As a child, Dudley discovered a hidden chamber amongst the rubble. There, a great wizard once lived who left behind books and magic relics including the powerful Phoenix Staff. Dudley became a recluse in the chamber, studying spells and gazing into his crystal ball.

Upon reaching Rank 33, the player enters the Castle Ruins and faces Dudley. To defeat him, they must battle every type of Dragon (other than the Common Dragon). After defeating him, the Dragons (Common Dragon included) reappear in the game as minibosses.

Dudley in the holiday pictures 2014

An image of Dudley from the Flipline Blog 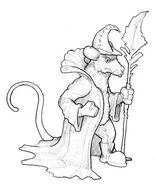 Sketch of Dudley from Flipline Rewind: Jacksmith
Add a photo to this gallery

Retrieved from "https://fliplinestudios.fandom.com/wiki/Dudley?oldid=503914"
Community content is available under CC-BY-SA unless otherwise noted.