View source
watch 02:52
Roblox: DeepWoken - The Loop
Do you like this video?
Play Sound

The Flipverse is the universe where all of Flipline Studios' games take place, from the Papa Louie restaurant management games to the Cactus McCoy series.

Towns in the Papa Louie universe:

Munchmore is an alternate dimension that is populated by sentient food. It contains all of the locations in Slider Scouts and the Papa Louie platformer games.

The Jacksmith universe is populated by anthropomorphic animals. It contains all of the locations in Jacksmith.

Go here to find a list of all locations in the Flipverse. 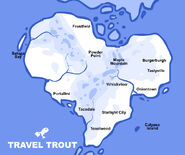 A map of the Papa Louie universe

A map of Munchmore in Papa Louie 2

A map of Munchmore in Papa Louie 3

A map of all the areas in Cactus McCoy 2