Georgito is a male customer who made his first appearance in Papa's Taco Mia!

Georgito is a short yet savvy businessman who grew up in the small town of Tacodale. He acquired most of his wealth when he moved to Starlight City. There, he opened Georgito’s Palace, which soon became one of the city’s most popular luxury hotel and pachinko parlor. Georgito still loves his hometown of Tacodale, and makes frequent trips back for his favorite steak tacos.

Georgito wears a pinstriped suit, with a vest underneath. The vest is black with white buttons and underneath that, there is a green dress shirt and a white tie. He has a monocle and brown hair. His pants are green along with his shirt. His shoes are black with green laces.

Ranks needed to unlock him

He is playable in this game. Along with Yippy, he can be unlocked after defeating Sarge. His skill is Crawling (due to his size) (again like Yippy), and his weapon is a money bag. 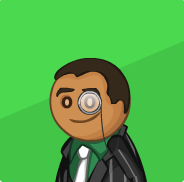 Georgito in Papa's Hot Doggeria. Notice how his skin is darker.

Georgito happy! GLITCH: His mouth is over his monocle

Georgito artwork of how he appears on the customers chart. 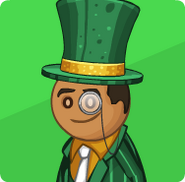 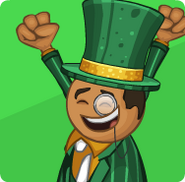 Don't hold your horseshoe upside down!

Georgito as a new customer in Pizzeria to go!
Add a photo to this gallery
Retrieved from "https://fliplinestudios.fandom.com/wiki/Georgito?oldid=129580"
Community content is available under CC-BY-SA unless otherwise noted.