View source
watch 01:54
Arcane: League of Legends - The Loop
Do you like this video?
Play Sound

Henshots are enemies that first appear in Jacksmith. They are chicken archers under the control of Dudley. During battle, they shoot arrows at soldiers; they can fire a single arrow straight ahead through the soldiers or fire an entire volley of arrows into the air that rain down onto them.

Phoenix Hens are hot-headed archers that can be found hiding among the charred trees of Cinder Springs. Phoenix Hens are a type of Henshot that has been enchanted with the element of Fire. There are seven other elemental forms of Henshots that are all under the control of the great wizard, Dudley. Other variants include Gillbeak, Frostfeather, Roosterite, Plucksquall, Thundercluck, Grass Gizzard, and Henwraith.

Sketch of a Henshot from Flipline Rewind: Jacksmith 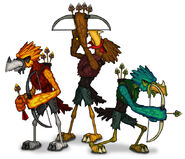