This page is about the lumberjack Johnny. You may be looking for a hidden character that can be quickly found when you flip through the customer files in both Papa's Pizzeria and Papa's Burgeria.

Johnny is a male customer who made his first appearance as a closer in Papa's Pancakeria.

Johnny is a lumberjack from Maple Mountain. His primary job is the chopping of pine trees for the many log cabins in the area. However, during the holidays, he sells the finest Christmas trees in the parking lot of Papa’s Pancakeria. Johnny is a town favorite at the annual Maple Mountain Woodchop Show, where he holds several medals in the Underhand Block Chop and the 60-foot Speed Climb.

Ranks Needed to unlock him

Johnny is not pleased in Papa's Hot Doggeria. 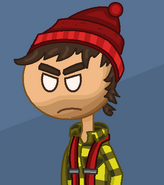 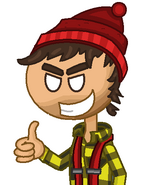 Artwork of Johnny doing a thumbs-up!

Johnny gets a perfect order in Papa's Cupcakeria!

Johnny gets Perfect Score & Gold Medal on his cupcakes!!!! 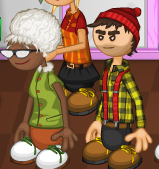 Johnny is ordering in Donuteria 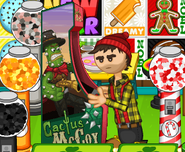 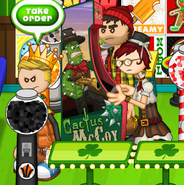 Johnny is near Skyler, who is playing Cactus McCoy

johnny's outfits in papa louie 3
Add a photo to this gallery
Retrieved from "https://fliplinestudios.fandom.com/wiki/Johnny?oldid=129581"
Community content is available under CC-BY-SA unless otherwise noted.