Kenton is a male customer who made his first appearance in Papa's Mocharia To Go!. He's a fan-made customer selected by fans in Kingsley's Customerpalooza 2020, created by James.

Kenton has fair skin and short black hair. He wears a navy-blue button-down shirt with yellow snowflake patterns on the sleeves, cream yellow sleeve ends, and white buttons under a gray vest with black stitches, black pants with gray stitches held by a pale brown belt with a golden buckle, golden sunglasses on his forehead, a pale brown scarf, and a black watch, navy-blue sneakers with pale brown soles, cream yellow vamps, and white laces.

He wears a pale brown collared shirt with cream yellow lining, a light blue shirt over it, and a navy-blue jacket with a lighter blue perpendicular line pattern, cream yellow buttons, and a golden handkerchief in the top left pocket. He also wears pale brown pants with pinstripes held by a black belt with a golden chain and gray buckle, a white necklace with a white snowflake in the middle surrounded by black beads, black sunglasses with golden lenses on his forehead, and shoes have black soles. 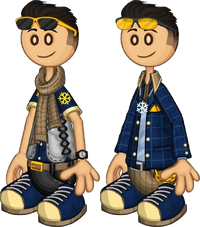 On his way to winning the eighth Customerpalooza, Kenton received more votes than: 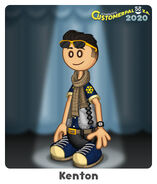 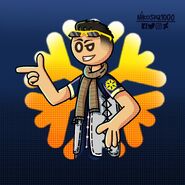 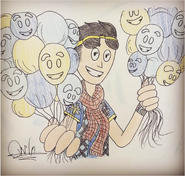