The Order Station is the first station in all of Papa Louie's restaurant time-management games.

Customers will make their way to the order counter on the left side of the screen. When the player is ready to take the customer's order, a screen showing the worker taking the customer's order is shown. In games where there is a Dining Room (since Papa's Pastaria), the worker who takes on the role as waiter or waitress is shown taking the order from the Dining Room.

While orders are being created by the player, the customer moves from the order line to the Pick-Up line and will either interact with the decorations that are on display in the lobby or will stand patiently waiting for his or her order to arrive.

When it is time to present the final order to the customer, the scene returns to the Order Station as the worker watches the customer judge the meal, gives his or her response, and provides a tip in the tip jar (and points to earn tickets for the mini-games). A point total and percent ratings from each of the three or four stations will appear on screen. The point total is all the percents added up, divided by 3 or 4 (not rounded up), times 4/3 if bronze customer, 5/3 if silver, 2 if gold, and 3 if getting a Star Customer Award. Depending on how well or how poorly the player does when building the order, the customer will react positively or negatively, with emotions ranging from:

The more positive response, the higher the tips the customer will give.

The player can also decorate your lobby with posters, wallpaper, flooring, and furniture, starting from Papa's Burgeria and on. From Papa's Freezeria and on, the player can manually place decoration wherever they want. The items in the lobby can only be changed before or after a game is played. Players are not allowed to change items or posters in the lobby while the game is being played. Customers can also interact with your furniture items, such as dancing to a boombox, drinking beverages, or playing an arcade game.

A very full lobby with Carlo Romano walking in it

Mandi coming into the Order Station in Papa's Hot Doggeria

Xandra waiting in the Cupcakeria lobby in the Order Station

Another example of the lobby in the Order Station 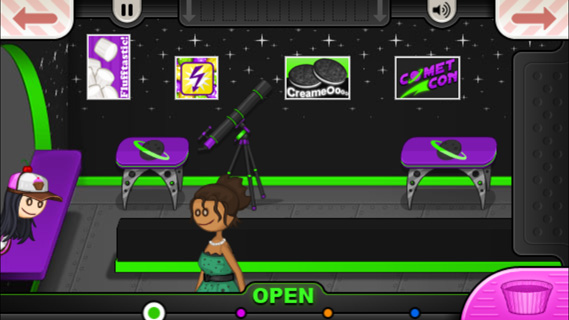 Cecilia is coming on at Order Station in Cupcakeria To Go! during Comet Con

A really basic order station in Scooperia...really basic..
Add a photo to this gallery
Retrieved from "https://fliplinestudios.fandom.com/wiki/Order_Station?oldid=434415"
Community content is available under CC-BY-SA unless otherwise noted.