Papa's Burgeria To Go! is the first To Go! game in the Papa Louie's restaurant management game series. The app was first announced on December 13, 2012 and was officially released on February 21, 2013.

We have good news for all you smartphone owners out there. A streamlined version of Papa’s Burgeria is coming to Android phones, iPods and iPhones! We are calling it Papa’s Burgeria To Go. The layout and game play has been highly optimized for the smaller screen and processing power of smartphones. This includes a new ticket management system, new building mechanics, and other things geared towards small screens. We are still in the early stages of trying to make it all work, but we will keep you posted. Here are some layouts for Papa’s Burgeria To Go!

Papa's Burgeria is now available to play on the go, with gameplay and controls reimagined for iPhone, iPod Touch, and Android phones. Grill, stack, and serve burgers in a brand-new way!

You're left in charge of Papa Louie's famous Burgeria, where you'll learn to take orders, grill patties, add toppings, and serve burgers to all of your crazy customers. You need to multitask between each area of the restaurant, with new controls that feel just right in the palm of your hand: Head to the Order Station to keep an eye out for customers waiting in the lobby. Switch to the Grill Station to drag patties onto the grill and flip burgers to cook them evenly. Jump to the Build Station to carefully craft your sandwiches with toppings and sauces exactly how they ordered, and deliver the finished burger to earn points and tips!

Each Station is a hands-on experience, where you'll need to drag, swipe, and tap your way through the burger-building process. With full multi-touch support, the process is more fun than ever before! Tap many burgers at once to flip them all on the grill, or keep one finger on the Build Station's bin slider for even better precision when building.

Keep your customers happy to earn more points and level up. As your level rises, you'll unlock new toppings in the shop, and new customers will start visiting the Burgeria! Papa's Burgeria To Go also features unlockable toppings that aren't available in previous versions! 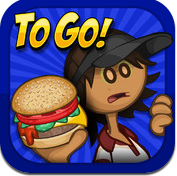 The build station as revealed on January 15, 2013. Toppings are aimed and dropped from the top slider, as is it hard to drag toppings on the burger with a finger in the way. 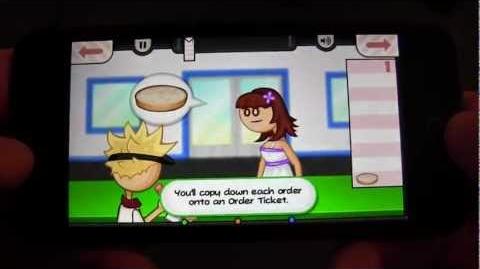 The Burgeria to Go! "Skyscraper" 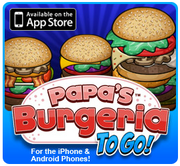