Papa's Donuteria is the tenth game in the Papa Louie restaurant management series that was released by Flipline Studios on June 16, 2014. The winners of Papa's Next Chefs 2014, Tony and Scooter, are the default workers in the game, but players can create their own custom worker as well. It is located in Powder Point. Just like in Papa's Pastaria, there will be a server that can either be Tony, Scooter, or another custom worker that can be hired when you reach Rank 4.

Roller Coasters speed overhead as you embark on a donut-cooking adventure in Papa's Donuteria!

You just got a job at Papa's Donuteria in the whimsical town of Powder Point. Sure, the great pay and benefits are nice, but you took the job for that coveted Line-Jump Pass. Unfortunately, now you have to cook dozens of delicious donuts a day for all the crazy customers in this carnival-like town. Cut out the donuts, fry 'em up, and decorate them with a dizzying array of toppings.

A new roller coaster named Sky Ninja is opening at the amusement park at Powder Point, and Tony/Scooter/Custom Worker can't wait to get on the ride. A job opening for Papa's Donuteria offers employees a "line-jump" pass that lets them get on the ride first, so Tony/Scooter/Custom Worker takes the job. When he/she finally gets on the coaster, it breaks down. The ride is closed, and it will take a year for it to be repaired. Although he/she is upset, their new boss, Papa Louie, informs him/her that it is time to open the Donuteria, much to his/her dismay.

The ending sequence for this game is at Rank 61. Tony/Scooter/Custom Worker and the server will try out the Sky Ninja again. Instead of breaking down like in the opening sequence, the ride actually works.

The days a player unlocks new customers (the ones who are not unlocked when reaching a new rank), and the order of when they become available depend on how well one performs during the course of the game. There are really no "set days" as to when some of the characters are unlocked, but their order of appearance should be correct.

The title screen of Papa's Donuteria

Rudy, Scarlett's Boyfriend, A New Customer, and a Closer.

New hairstyles and facial hair for the guys

Additional hair styles and new bangs for the girls

Finally! I got in!

Additional hairstyles for the guys

Hair Colors for your Owner 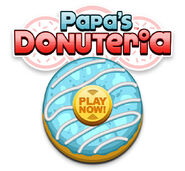 Cooper and Prudence in the dining room.

The Closers in the customer parade during Halloween

Perfect with Cooper at the Dining Room!!!!

The Big Top Carninval on Thanksgiving

Glitch in game (see the pumpkin donut with the flattened doughs)

Another glitch (only 2 donuts)

Tony attending his wife mandi and his friend matt

All the Closers' Halloween portraits

The first day of Thanksgiving with Sienna!

Seems like real Christmas trees are being decorated! (This is Rita's order)

Xandra, Ivy, Clair, Georgito, Edna and Kahuna in the parade

Two mysterious ninjas in the Donuteria, while Ninjoy is busy playing Rowdy Rico

Powder Point during the New Year

Powder Point during the Summer Luau

and last but not least, Powder Point during Sky Ninja Returns

All 90 customers (except Tony and Scooter).

Maggie Complete her order in Halloween in Papa's Donuteria

That should have been "Azuki Buddy"

So close to zero points in this rank!!!

Kahuna and Little Edoardo has their perfect donuts!

Quinn has her perfect donuts too!

"Excuse me, I debuted in this game, and this is what I get?! Charcoal with pink goop on it?! Come on, already."

Darn it. I think I messed up on something.

"If you keep writing my name on my donuts, then I'm never coming back here!"
Add a photo to this gallery