Papa's Pizzeria is the first game in the Papa Louie time-management restaurant series, and was officially released on August 7, 2007. Papa's Pizzeria takes place in Tastyville, with Roy as the sole worker in the game.

For this very first edition of Travel Trout Tours, we take you to the place that started it all, Papa’s Pizzeria!

This building houses Papa Louie’s very first restaurant, Papa’s Pizzeria. There are over a dozen apartments above the pizzeria, which are home to some of your favorite customers. You can climb the stairwell all the way to the roof and see a breathtaking view of the bustling town of Tastyville. [1]

Help Roy run the pizzeria while Papa Louie is gone!

When Papa Louie runs off on another adventure, Delivery Boy Roy is left in charge of Papa's Pizzeria. Unfortunately for Roy, the customers are used to Papa Louie's style of fully custom pizzas. Whether it is 8 slices of pepperoni everywhere and 2 olives on the lower half, or a 10 onion pizza cooked well done and cut in 4 slices, there is no telling what they will come up with. So, master the 4 stations and work up the ranks to be the best Pizza Chef around!

One day in Tastyville, Roy finishes delivering pizzas and comes back to the restaurant. When he enters the Pizzeria and turns on the lights, he shouts for his uncle, Papa Louie, but there is no answer. Roy shouts again, but Louie is nowhere to be found. Roy spots a letter on the counter and reads it. In the letter, Papa Louie tells Roy to run the Pizzeria while he's gone. Terrified, Roy sees Kingsley at the door waving his hand. 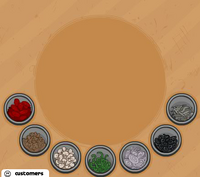 If a player names their save slot almostpapa the game immediately jumps them to Day 99 at Rank 30, and every customer will be unlocked with a gold badge except for Sarge Fan!, who is given a silver badge with 3 stars.