Papa's Sushiria is the thirteenth game in the Papa Louie restaurant management series. The game was first announced on October 25, 2016. Matt and Clover are the default workers in this game, as they were the winners of Papa's Next Chefs 2016. The game takes place in Sakura Bay. The winner of Kingsley's Customerpalooza 2016, Elle, makes her official debut as a customer in the game. The game was officially released on December 13, 2016, as a Christmas present from Flipline Studios. [1]

Slice and serve the most delectable sushi around in Papa's Sushiria.

Your day takes a turn for the worse when you break Papa Louie's lucky cat statue. Is this to blame for the restaurant's underwhelming opening day? All we know is that Papa Louie left on a wild-eyed mission and you're now stuck running the restaurant. Can you turn your luck around and master the fine art of sushi making?

Perfectly cook, season, and spread the rice with the all-in-one "Sushi Square". Then fill, roll, and top the sushi with a huge assortment of brand-new ingredients. Finish it off by cutting the sushi into bite-size morsels for your hungry customers.

Bring in the bubbles! Papa's Sushiria also has Bubble Tea to serve alongside the sushi. Mix the flavored teas with milk then add tapioca pearls or one of the many other deliciously flavored bubbles.

Missing your favorite customer? Why not send them some coupons with the help of your friendly mailman, Vincent! Customers love a good deal, and will promptly arrive to order more food. Coupons are great for completing quests and strategically leveling up customers!

We have a huge surprise for you today! We are super-excited to announce Papa Louie’s next restaurant extravaganza…. Papa’s Sushiria! [2]

The workers are Matt, Clover, and the Custom Worker. The standard worker's uniform consists of a black kimono with green and salmon trim, a green apron with a sushi-designed "buckle," salmon pants (a skirt for female workers), white headbands with the same sushi-design on the front, and black shoes with green laces and gray soles.

Papa Louie calls over Matt/Clover/Custom Workers to show them the new statue, which is a humongous, golden Maneki Neko. The workers are pleased to see the statue, but are shocked to see lots of customers surrounding the restaurant, all of whom came to take a look at the new statue.

Bold means ingredient is both filling and topping

Bold means ingredient is both filling and topping

Holiday ingredients consist of one filling, one ingredient which is both filling and placeable topping, one shaker topping, one sushi sauce, one paper, and one tea flavor. 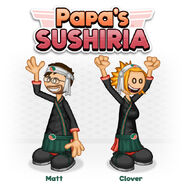 KCP winners in the parade

A Look at Tea Party Sticker

For some weird reason Wally doesn't like his sushi

Utah have a perfect sushi at the first day!

Nevada have a perfect sushi at the first day!

Marty have a perfect sushi at the first day!

The Ending in Papa's Sushiria.

All the Customers outside of Papa's Sushiria.

Getting the Sasha Miso Sticker

Getting Go Green by Serving Wasabi & Furkake for Fitz

First order of Wylan B

Perfect plate of sushi for Ivy during New Year

Perfect with Xandra on 1st Day of New Year

A Look At Friendly Fill-Up in Sushiria

Cletus and Papa Louie in the dining room.

Brody is jealous because Papa Louie has coffee and he doesn't.

Perri: Great blueberry pie! What even is this stuff? Rudy: I know, dude. That's not what we wanted. Matt: I'm sorry?

Perri: Come on Gremmie! Dance with me! I LIKE TO MOVE IT MOVE IT! Gremmie: Oh, I wish I was as good as her...

Austin is quite pleased.

Elle is dancing in the lobby.

Akari, Koilee, Kingsley, and Franco in the lobby. Koilee ends up recieving the "Green Overload".

Akira, he made perfect sushi for Jojo !!!

Perfect and a Gold Star Customer on Hacky Zak

Papa: "Thanks for all your help, Vincent, you are someone to rely on!"

Mitch & Maggie at the Dining Room

A perfect score on Peggy and Alberto. 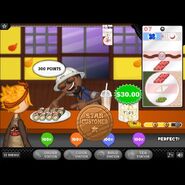 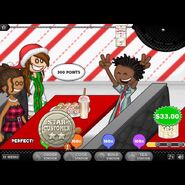 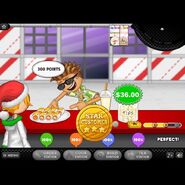 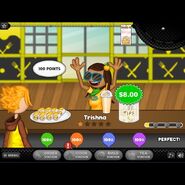 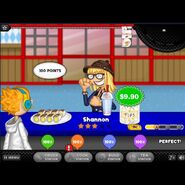 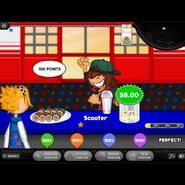 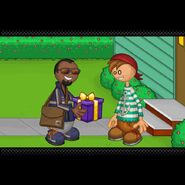 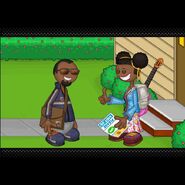 Gremmie also not thrilled
Add a photo to this gallery 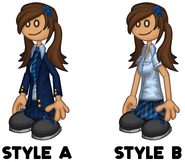 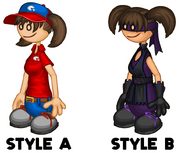 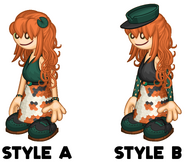 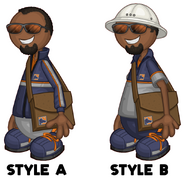 Vincent
Add a photo to this gallery

Retrieved from "https://fliplinestudios.fandom.com/wiki/Papa%27s_Sushiria?oldid=458638"
Community content is available under CC-BY-SA unless otherwise noted.