Papa's Taco Mia! is the third game in the Papa Louie's restaurant management series. The game was announced on March 21, 2011. Mitch and Maggie are the workers in this game. The game is located in Tacodale. The game was released on May 20, 2011.

So what happens when an Italian chef opens a successful Pizzeria and Burgeria? Build the biggest, wackiest Taqueria anyone has ever seen!

After winning a taco eating contest, you're awarded the keys to Papa's Taco Mia! Good luck though, because all your favorite customers are back, and they brought friends. Unlock all sorts of ingredients and upgrade your shop for style and speed. Try to please those picky Closers, and mystify Jojo the food critic with your wild taco making skills!

You can also earn up to 60 Badges while running Papa's Taco Mia!, unlocked for a variety of achievements, including using certain toppings, getting high scores in each Station, serving certain customers, and more!

One day in Tacodale, Papa Louie opens his new taco shop and hosts a Taco Eating Contest. Mitch/Maggie camps out in front of the shop to be the first contestant. The other competitors are James and Kingsley. The contest starts and the three contestants must eat as many tacos as they can.

In the later afternoon hours, James gets a stomach-ache while eating a taco and gives up. In the evening, as Kingsley tries to eat his next taco, he begins to sweat and surrenders also. This means that Mitch/Maggie wins the contest and the trophy and is unexpectedly given the shop by Papa Louie.

New features that are introduced in this game, and will be used in future Gamerias, are:

There are 60 badges in Papa's Taco Mia!:

Glitch in Papa's Taco Mia!, which a part of the introduction shows transparent.

Original concept of pourable meat into the tacos 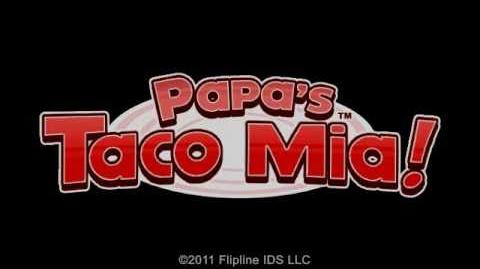