Papa's Taco Mia HD is the fifth HD game in the Papa Louie restaurant management game series. The app was first announced on May 3, 2016. It was released on June 27, 2016.

The original Papa’s Taco Mia came out almost 5 years ago. It was only our third time making a Gameria, but it was ground breaking for it’s time. We introduced unlockable toppings, closers, badges, and many other things. However, five years is five years, and many gameplay elements have evolved since then. So much has improved that Papa’s Taco Mia HD feels like a brand new game. We’re very excited to show off all the cool stuff we have been working on, so tune in next time for more Sneak Peeks of Papa’s Taco Mia HD!

Get ready to build some tasty tacos unlike any you've made before! As the seasons change outside the taco shop, your customers will order brand-new holiday tacos with a huge amount of new seasonal ingredients. You'll unlock new taco shells, meats, toppings, and sauces for each holiday of the year, and your customers will love thinking outside the box and ordering a creative new take on tacos.

Customers will occasionally bring you unique Special Recipes, which you can serve as the Daily Special in the taco shop! Each Special also has a bonus you can earn for serving a prime example of that recipe. When you serve enough Specials to master that recipe, you'll also earn a special prize!

Papa's collection of Stickers are now arriving on your tablet! During the game, you'll be able to earn 90 colorful Stickers by completing a wide variety of tasks and achievements. Each customer in your shop also has a list of their three favorite Stickers: Earn all three of that customer's favorite stickers and you'll be rewarded with a brand-new outfit to give to that customer!

Play as Mitch or Maggie, or create your own custom character to work in the restaurant! You can also hire or create a Server to help with your shop's Dining Room, where customers can sit and enjoy their freshly-made tacos. Visit the Shop to find an extensive wardrobe of holiday clothing and accessories for your workers, which you can buy with your hard-earned tips. Earn even more clothing and other prizes by playing Foodini's Mini-Games after each workday!

The customizable lobby is back, with new themes of furniture and decorations for each holiday of the year! Decorate the restaurant with holiday decorations and your customers won't mind waiting even longer for their food. You can also change the wallpaper, flooring, countertop, and trim, which will change the decor in the Dining Room as well!

Bold for sauces also used as dips in the chip station.

Holiday ingredients consist of one taco shell, one meat, two toppings and one sauce. 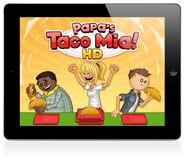 Funny: You can actually add raw/uncut/both meat onto your tacos, but why risk it? 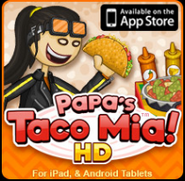 Funny Side-Up: An uncooked egg in a Waffle Taco 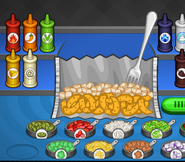 Is this beef? Is it burnt eggs?

3 customers are dancing and earn the sticker

Perfect during his favorite holiday! 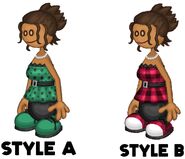 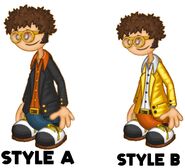 Xolo
Add a photo to this gallery