Papa Louie: When Pizzas Attack! is the first game in the Papa Louie series of platformer games. The game was released on November 9, 2006.

The adventure that started it all! While Papa Louie was hosting a party at Papa's Pizzeria, the Infamous Onion Ring infiltrated all the orders. Delicious pizzas were transformed into gooey Pizza Monsters that kidnapped all of Papa Louie's customers, teleporting them to far off lands. Armed with his trusty pizza paddle and loads of Pepper Bombs, Papa Louie must rescue all his loyal customers and put an end to the Infamous Onion Ring.

As Papa Louie prepares his free pizzas for everyone in his restaurant, Papa's Pizza (which has a paper that is glued to its window saying "Free Pizza for Every Tenant - Today Only!") and he gives them to his nephew, Roy, the pizzas that are peppered suddenly come to life and turn into monsters. One of the pizza boxes on Roy's hand is released and creates a vortex that leads Papa Louie and Roy into a universe of pizza materials (some are cheese and tomato sauce). In this vortex, all of the customers of Papa Louie are captured in cages and Papa needs to save them in order to get the keys that lead to the boss fight with Sarge. As Papa saves his first customer (Big Pauly), who sells peppers next door to Papa's Pizza. He helps Papa Louie by giving pepper bombs that can penetrate to the Pizza Monsters to him, each pepper bomb being worth 10 coins.

When Papa Louie defeats Sarge, all of the pizzas turn back to normal. Then, Papa enters Papa's Pizza and delivers free pizza to every customer that he has saved. At the end of the game, Papa Louie eats a slice of pizza and then, the sentence "Thanks For Playing!" appears.

Papa Louie is able to do four types of movement in general: walking, jumping, attacking and gliding. Using the left and right arrow keys is enough to walk, To make Papa Louie run on one certain direction, however, the player must press one of the two arrow keys for a while. Spacebar makes Papa Louie jump and if the player presses the Spacebar again as Papa is in midair, Papa Louie will start gliding. Gliding is especially more vital in the Kongregate version of the game, as some of the Kongregate coins can only be accessed by gliding from a point. Attacking, on the other hand, is slightly more complicated. Pressing "Z" makes Papa Louie attack and defeat any enemy (except for Pizza Monsters) using his wooden pizza handle. If the player presses "Z" for a while as Papa walks, Papa Louie starts a poised attack, in which Papa Louie may attack any time by just stopping to press the button. Note that as Papa makes a poised attack, his steps become significantly slower. Papa Louie may also throw pepper bombs (if he has any) by pressing the "X" button. When Papa throws a bomb, the bomb goes in an arc and bounces twice, as its height decreases. Pepper bombs are an important weapon for Papa, as it is the only item that can directly penetrate the Pizza Monsters (when compared to hitting the cheese wad of the monster back to it by using the pizza handle).

The game consists of four worlds and each world has three stages, which makes a total of 12 stages. All four worlds are differently themed. While the first world has got to do with multigrain fields (which is the main material for the dough of the pizza), the second world has stages in the pasta jungle. The third world has a theme of a tomato sauce city and the fourth world is mine-themed. Once a player finishes the third and last stage of World 4, he/she gains access to the boss fight with Sergeant Crushida Pepper,or Sarge, the main antagonist, and also the master of all of the enemies in the game.

Normally, Papa Louie has 5 full hearts as his maximum HP. When Papa makes contact with an enemy or a moving obstacle (such as a rolling stone), one of his "hearts" is drained. If all of the hearts are drained, Papa Louie faints and he is thrown away from the vortex that leads to the stage. However, Papa will still continue entering the vortex unless the player chooses to quit the game, no matter how many times Papa Louie has died.

In each stage, there is a certain number of Pizza Monsters. To finish a stage, all of the Pizza Monsters must be turned into normal pizza boxes and Papa Louie must lift the cage by jumping on the left side of the scale as he carries all the boxes. When a player finishes a stage, he/she will obtain the key to the next stage from the customers that he had recently freed. Yellow coins are scattered across each stage. As the player collects more coins in a stage, he/she will gain more bonus points. These coins can be used to purchase pepper bombs from Big Pauly the pepper seller, each pepper bomb being worth 10 coins. The Kongregate version of the game also has 3 Kongregate coins that are scattered around each stage, thus making a total of 36 Kongregate coins that are also part of the badge "Gourmet Kongregate Supreme", which is worth 30 points and considered to be "Hard".

As the first installment of the Papa Louie series, Papa Louie: When Pizzas Attack! generally received an OK reception from players. It has a rating of 3.4 out of 5.00 in Kongregate according to the votes of the players of the game on the same website.

Banner found via the WayBack Machine

The scrapped Fort Onion from the flipline blog 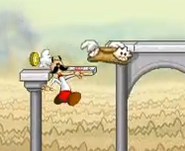 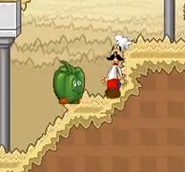 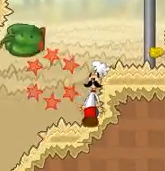