76
Radley Madish is the main antagonist of the Papa Louie franchise. He serves as the main villain of Papa Louie 2: When Burgers Attack! and Papa Louie 3: When Sundaes Attack!. He is the final boss in both games and has to be defeated to save Papa Louie in the former.

Radley Madish is a crazed scientist from the Land of Munchmore. He is a master of gadgetry and foodie Frankensteins. While researching a strange Warp Key, Radley discovered the power of interdimensional portals. With his new found knowledge, Radley began his maniacal mission to takeover Munchmore, Tastyville and eventually the entire Flipverse!

Radley Madish is a wild radish scientist who has hired Sarge and his Infamous Onion Ring to wrangle up Papa Louie and his loyal customers. He’s a master of gadgetry and foodie Frankensteins. Radley Madish’s most recent creations are the vicious Burgerzillas. Although his Burgerzillas are dangerous, they could use some work. His solution is to capture the most famous chef around, Papa Louie. Radley figures if Papa can make a perfect Burger for his customers, just imagine what kind of Burgerzilla he could build for Radley’s growing army.

The third and final part is again against Radley himself. This time though, the player cannot reach him, for he continues to fly and will fly higher when the player jumps. Radley will shoot two barbecue sauce containers at the player, which will follow the player, and then pararadishes will descend from the sky. Hitting both the radishes and the barbecue sauce will dispel them. On his third shot, Radley will shoot a mustard container, and hitting it will send it back at him, knocking him out of the sky for a short time. the player must then hit Radley as many times as the player can when he is knocked down before he goes up again. Using Boomer, it is possible to defeat Radley by knocking him down only one time, due to the fact that her gun will repeatedly stun Radley. If the player do not defeat him again, he will again fly up, shooting the player as he did before, except more rapidly. Burgerzillas also join the mix. the player can knock him down with the mustard in the same way as before. After defeating Radley, Papa Louie can be saved.

"Radley is back and even more Mad-ish! After his first failed attempt to capture Papa Louie, Radley quickly started work on a new plot to capture some high-ranking chefs. He started by cleaning house and firing Sarge. He then started crafting his most powerful Monster Guards to date."

In Papa Louie 3, Radley is battled in a cookie-themed stage called Radley Caverns. As soon as you enter the stage, you will fall into a pool of chocolate milk. Then Radley will appear inside a giant radish-shaped submarine! The submarine will begin to chase you and fire missiles, so you'll have to outswim Radley while avoiding or killing the underwater baddies along the way. Sometimes you may get cornered against a cracker wall. You'll have to let Radley destroy the wall by getting him to fire a missile at it, then dodging it so the missile hits the wall instead of you. After you make it to the end of the lake, you can get out onto dry land, activate the checkpoint, and then proceed down the hall to begin the second phase.

The next room contains a cage holding Penny and Alberto. However, before the player has a chance to free them, the cage is pulled up, and Radley's submarine emerges, and converts itself into a rocket, so the second phase begins. This part is more or less like the battle in Papa Louie 2, with some differences. You can't hit Radley's rocket with your weapon as he'll just hover higher to avoid you, but this time he has five HP instead of three. Pararadishes will begin to spawn, and Radley will shoot chocolate missiles that home in on you. After firing two chocolate missiles, Radley will fire a banana missile that, when hit, will fly back to Radley and bring him down. The cockpit of the rocket will open up so you can hit Radley. After that, Radley will fire five chocolate missiles before using the banana missile. When you hit him again, the radish rocket will sprout a freeze ray that will occasionally fire and can freeze the player if they're hit. Also, Radley will start to fire chocolate missiles more rapidly, shooting three at a time! After a third hit, Radley will also start to ram the rocket into the ceiling to make Creameo Boulders rain down. And after the fourth hit, Radley will summon Sundaesauruses onto the area. When you bring Radley's rocket down for the last time with a banana missile, Radley will tumble out of the rocket. When you hit him for the fifth and last time, he'll be defeated and you can rescue Penny and Alberto.

Here is the song that plays when fighting Radley Madish in Papa Louie 2 & 3: 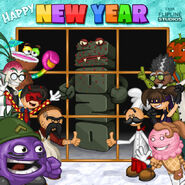 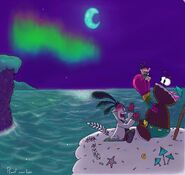 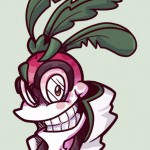 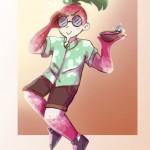