watch 02:44
The Loop (Games)
Do you like this video?
Rico's Chili Dog is a special recipe that can be selected by players to be the "Special of the Day" in Papa's Hot Doggeria HD/To Go!. Customers ordering the Rico's Chili Dog special will give the player 1.5x

. The special prizes for this recipe are the Tucked Polo (HD) and the Sm. Sugarplex Table (To Go!).

The Prize in Hot Doggeria HD.

The prize in Hot Doggeria To Go!
Add a photo to this gallery

Rico's Chili Dogs was the seventh recipe featured in Papa's Cook Book, a feature on the Flipline Studios Blog.

The instructions are posted here.

Break up the ground beef into a large saucepan. Cook over medium heat, stirring the beef frequently. Keep this up until the beef color changes from pink to a light brown.

Stir it all up, and bring the chili to a boil, stirring occasionally. Once boiling, let it boil for about one minute. Then, reduce the heat to low. Cover the saucepan and let the chili simmer for 1.5 hours. Don’t forget to stir the chili occasionally while it’s simmering.

After it is done cooking, let it cool down, then put it in the refrigerator for at least 8 hours. After that, remove the bay leaf and any excess grease that formed at the top

Get your hotdogs out and grill them up to your liking. Heat up the chili over medium heat, stirring occasionally. Put the cooked hotdogs into the buns and using a ladle, cover them with Rico’s Chili. Next, add a line of mustard and pile up the cheddar cheese. Now you have some delicious, Rico’s Chili Dogs! 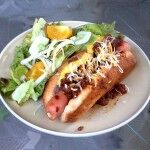 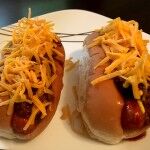 Rico's Chili Dog made in Hot Doggeria
Add a photo to this gallery
Retrieved from "https://fliplinestudios.fandom.com/wiki/Rico%27s_Chili_Dog?oldid=487422"
Community content is available under CC-BY-SA unless otherwise noted.