watch 03:19
Wiki Targeted (Games)
Do you like this video?
Play Sound

Scarlett and the Shakers is a ska-punk band consisting of lead singer Scarlett, guitarist Marty, Clover on drums, and Rudy on bass guitar. Janana is the band's manager.

In both Papa's Cupcakeria and Papa's Pastaria, there is a badge called Scarlett and the Shakers which must earn by serving Marty, Clover, and Scarlett.

After Rudy had made his debut, this badge could be earned in Papa's Pizzeria To Go! by serving all four members of the band.

From Papa's Bakeria onwards, the player can earn a sticker for serving every member of the band.

Scarlett and the Shakers' band show on Papa's Cheeseria.

When Rudy was absent in the band, was temporarily replaced by Camilla (Waffles's OC) for some time. Currently, Camilla does solo career. 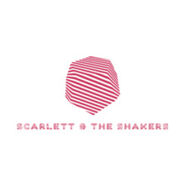 The branded logo for Scarlett and the Shakers. Fan-made using the Tailor Brands Studio.

By Nikospa1000
Add a photo to this gallery
Retrieved from "https://fliplinestudios.fandom.com/wiki/Scarlett_and_the_Shakers?oldid=502629"
Community content is available under CC-BY-SA unless otherwise noted.