Sugarplex Film Fest is a holiday celebrated in several Papa Louie's restaurant time-management games. Upon reaching this holiday in any of the games below, Rita makes her first appearance as well:

Achievements such as "Concession Stand", "Movie Marathon", "Blockbuster", and "Lights, Camera, Action!" are earned when all of the Sugarplex Film Fest exclusive ingredients are unlocked.

Customers bring in movie tickets to celebrate the holiday.

The wallpapers for this holiday.

Pancakes with all of the ingredients in Pancakeria HD. 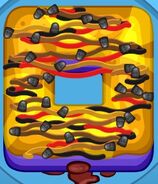 A donut with all of the Sugarplex Film Fest ingredients from Donuteria To Go!
Add a photo to this gallery

Whiskview Mall during Sugarplex Film Fest.
Add a photo to this gallery

Retrieved from "https://fliplinestudios.fandom.com/wiki/Sugarplex_Film_Fest?oldid=447826"
Community content is available under CC-BY-SA unless otherwise noted.