Room L - Munchmore Monsters
SundaeSauruses are the main enemies in Papa Louie 3: When Sundaes Attack!. They are Papa Louie 3's counterpart to the Burgerzillas from the prequel.

Sundaesauruses are frigid ice-cream monsters concocted by the evil Radley Madish. Given their soft-serve consistency, they are highly adaptable and can easily roll with the punches. They have been known to use their glass cups as helmets, and even shoot the occasional ice cream ball at would-be attackers. Although Radley tried many flavors, he found the vanilla/strawberry Sundaesaurus to be best suited for the job at hand.

SundaeSauruses are large angry vanilla sundae monsters that have a large mouth that never closes, chocolate balls for eyes with glowing magenta pupils. They have a visible gummy worm that acts as its tongue and dripping chocolate syrup that resemble teeth. The top of its head is covered in strawberry drizzle, sprinkles, and a single cherry on top. It carries around a glass cup for both protection and is its form of transportation.

Without its cup, the SundaeSaurus is shown to be slug-like in appearance with its eyes being fully open.

SundaeSauruses take three hits to be defeated; their attack patterns will change after each hit they take.

Initially, SundaeSauruses just jump around the level, much like Burgerzillas. When you hit one for the first time, though, its cup will flip onto its head and it will slowly crawl after the player, sometimes spitting ice cream at them. After being hit a second time, the SundaeSaurus's cup will shatter completely and it will start chasing the player at a much faster speed. At this point, the SundaeSaurus can be killed by hitting it with your weapon or even just simply jumping on it.

These freezie frankensteins will do whatever it takes to protect Radley and guard the captured customers. SundaeSauruses are very tough and can take a quite few hits before calling it quits. [1]

SundaeSaurus in the sneak peek of When Sundaes Attack! 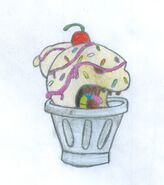