Tacodale is a fictional town located within the Flipverse. It is home to Papa's Taco Mia!.

Tacodale is represented in Griller Stadium by the Tacodale Hardshells baseball team and the Tacodale Supremes hockey team.

The local high school is Tacodale High, and the sports teams that compete for the school are called the Churros.

With regard to time zones, Tacodale is one hour behind Burgerburgh and one hour ahead of Sakura Bay. [1] 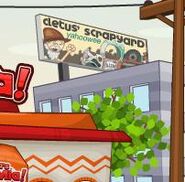