$0.99 USD
$1.49 AUD
Free with The Great Slider Shrine
The Bananas are enemies who made their first appearance in Papa Louie 3: When Sundaes Attack!. [1]

Banana Pants were originally from an exotic archipelago known as The Mofongo Keys. They were recruited by Radley Madish and brought to the mainland to help invade Neapolitown. The Banana Pants were promised trousers made of the finest silk in exchange for their help. However, in an attempted to cut costs, Radley substituted silk for burlap. The Banana Pants were stuck with intensely itchy trousers, causing them to jump and skip around without any regard for their surroundings.

They look like bananas with eyes and tiny arms, and are seen wearing purple pants with white stripes and they have grey shoes. They move by jumping, much like the Roma Tomatoes from Papa Louie 2.

They look the same as Banana Pants, but they have blue pants, flippers, and goggles. They appear underwater, swimming up and down. They can only be defeated by customers with the Swim Boost ability.

We’ve been working hard on Papa Louie 3 and making some great progress on the game! This week we’ve been working on some of the levels in the game, including an epic boss fight, as well as adding all of the customers and their weapons. We’re still working on the game and don’t have a release date planned yet, but in the meantime here’s a look at more enemies that will be appearing in Papa Louie 3: When Sundaes Attack!

You may remember Banana Pants from Foodini’s “Cool Shot” mini-game in previous Gamerias, and he’ll be hopping his way across Munchmore in Papa Louie 3. When you’re swimming in some of the underwater areas, you’ll also find the aquatic Scubananas kicking up and down in the water, so try to stay out of his path! 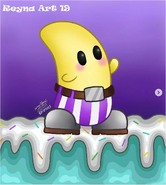 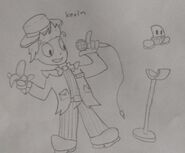