The X Zone (also known as Level X in the level select screen and the Kingdom of X in Xandra's flipdeck), is a bonus level in Papa Louie 2: When Burgers Attack! and Papa Louie 3: When Sundaes Attack!. It also appears as an area in Slider Scouts.

In Papa Louie 2 and Papa Louie 3, the level is unlocked after the player has defeated Radley Madish and has acquired all 50 Warp Keys. In Slider Scouts, it is unlocked when the player reaches Rank 48. It is the final level in the game.

There are no missions in this level, but the player can save Xandra (PL2) and Xolo (PL3) here and collect all the collectible items for extra points.

The X Zone re-introduces players to many of the baddies and collectibles that appeared throughout the respective games. 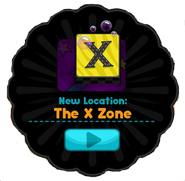 The X Zone in Slider Scouts

The end of the Kingdom of X

Add a photo to this gallery
Retrieved from "https://fliplinestudios.fandom.com/wiki/The_X_Zone?oldid=492035"
Community content is available under CC-BY-SA unless otherwise noted.