Unfinished Sarge Game Demo is a demo of what would have been the sequel to Papa Louie: When Pizzas Attack! featuring Sarge as the protagonist. It was featured as part of the month-long OnionFest celebration by Flipline Studios. While not a complete game by any means, it does show what the game could have been like if fully developed.

As a big “THANK YOU!” to all our fans, here is a playable version of the Unfinished Sarge Game Demo! [2]

To celebrate OnionFest, we have an extra-special Flipline Rewind for all of you!

It was January 2007 when we decided to start work on a sequel/spin-off of Papa Louie: When Pizzas Attack! We wanted to focus on Papa Louie's main antagonist, Sergeant Crushida Pepper. We now simply refer to him as Sarge.

We wanted the player to see things from the perspective of Sarge immediately after the biggest defeat of his career by Papa Louie. Sarge was demoted in the Onion Army and put on recruitment duty by the Army General.

In order to rise through the ranks and bring glory back to his name, Sarge needed to rebuild the Onion Army one recruit at a time.

This puzzle-platformer was going to be structured around picking up and throwing things. He would recruit new onions by pulling them out of the ground, and use them in battle by tossing them around. Along his journey, he would come across a wide variety of onions. One such group of onions were Rocket Onions. You may have seen them in a past holiday post. Fun fact: our customer, Boomer, was created based off of our old designs for the Rocket Onion.

Some old friends and fresh enemies were to also set to make appearances in the game. Radley Madish was originally created for this game, and was to be the mad scientist who created Rocket Onions. Ever wonder why Jellybacks seem a little out-of-place in our games? That's because they were designed for Sarge's game, and at the time, we had planned out a world that wasn't entirely made up of food-based baddies.

At the time, Flash games were still at their infancy and they were still a few years from reaching their peek. During that time, many companies and portals were experimenting with different ways to monetize Flash games. While ad-revenue was just starting to pick up for Flash games, the emerging concept of Microtrans for free games were being beta tested in the form of Kongregate’s Kreds and Mochi Media’s Mochi-Coins.

By the end of planning, we had decided on an episodic style for the game. As Papa Louie's ad revenue was not sustainable at the time, we decided that Sarge’s game would be divided into many Episodes. Each episode would then have three chapters. The first chapter was free, while the remaining two would be unlocked by our favorite salesman, Big Pauly. He would sell you a key to unlock the rest of the map via a small in-game purchase.

Being episodic, the gameplay would be very story and character driven. Lots of NPCs and story based goals for each of the levels. Looking back at the plans, it sounds like a pretty fun game. [3]

There is only one level in the demo, but the full game would have had episodes, each with 10 levels grouped into three chapters. Each episode would have focused on one new type of onion, with the first episode introducing normal onions and rocket onions.[4]

Episode 1: Where the Gourdos Grow [5]

The Cast of the Game 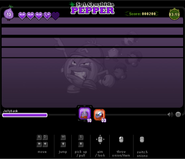 The switch page
Add a photo to this gallery
Retrieved from "https://fliplinestudios.fandom.com/wiki/Unfinished_Sarge_Game_Demo?oldid=492614"
Community content is available under CC-BY-SA unless otherwise noted.